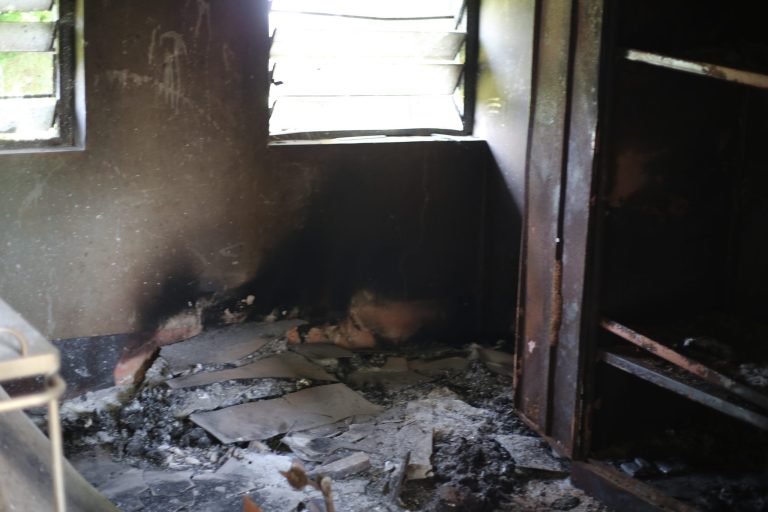 News from Benue has been dominated by accounts of carnage in Konshina. A journey to Bonta is like a pilgrimage to a slaughterhouse. Here, in April, the Nigerian military brought down houses, schools, and clinics. They shot at defenseless villagers and wasted dozens of lives.

“They claimed they were here to protect us but they only came for us,” says Emmanuel Gungul, a youth leader. “They destroyed our properties and slept with our women, all in the name of chasing the bandits that killed their soldiers.”

Nobody stays here anymore. Not the hopeful mothers who filled the maternity ward of this community clinic, or the sick patient dying from malaria and typhoid.

The bullet-ridden walls of Bonta clinic are darkened with puffs of smoke from the fire ignited by the military. The drugs, beds, and files in it have been reduced to ashes. Almost everything here is burnt, including the maternity ward, staff room, and the only generator supplying light in moments of darkness.

Dr. Akera Terkimbir does not know how the war started but shares in the ruins that accompanied it. In March 2019, he was deployed as the head of the medical team at the Bonta Health Centre. Now, the military has brought down the clinic.

“I was sitting here around 8 am when I saw an airplane coming,” Terkimbir recalls, agony locked in his eyes. “I was told that soldiers brought it. I was here with my staff. We were armless, we could not help ourselves, so we decided to run away.”

When the angry soldiers came firing rockets, Terkimbir says, sick patients and nursing mothers in the maternity ward scampered away. Everyone in the clinic ran for dear life.

“We lost some of our patients on admission,” he says. “One fetus and three patients were killed during the attack.”

Shimenenge Wade, 29, died in front of the clinic. He was just recovering from typhoid and malaria but the soldiers’ invasion ended his life. As he trudged out of the clinic, he lost his footing, hit his head on rubble, and died.

Also diagnosed with severe malaria, Mbalamen Kumaga, 28, was lying on the sickbed when the soldiers barged into the clinic. She removed the syringe needle plunged into her vein and ran for her life. Unfortunately, Kumaga fell flat on the ground when a bullet from the military’s sporadic shootings hit her. She died immediately.

Mbanengen Pendamo, 28, was said to have died at home. He managed to escape the soldiers’ vengeance in the clinic. But on his way home, the military airstrike struck him. He died in front of his house, in the pool of his blood.

“We also had a fetus born prematurely which died in the hands of its mother during the attack,” Terkimbir says. “It’s a sad moment for us.”

Mercy Thomas, 31, was having a nap in her shady room. The time was 11:40 pm. The sex worker woke up suddenly, noticing that a “cold iron” was placed on her forehead. As she opened her eyes, an army officer “appeared like a ghost” and ordered her to open her legs.

“I was really scared,” Mercy recalls. “He removed my pants and started having sex with me. I cried but nobody came to my aid.”