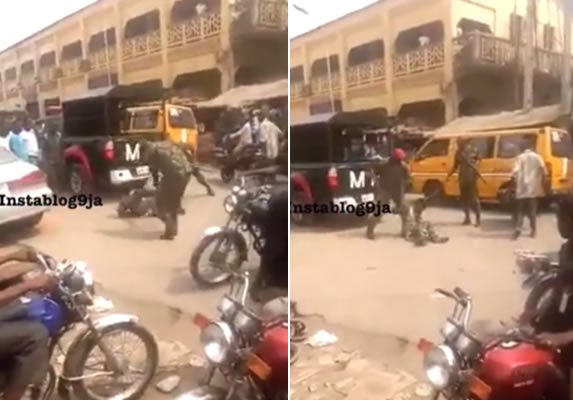 A video showing soldiers brutalising a physically challenged man allegedly for wearing camouflage clothing has been uploaded on the Internet, sparking outrage.

The undated video, published by Instablog9ja, was recorded on Tuesday on the New Market Road in Onitsha, Anambra State, according to social media users.

In the video, two soldiers are seen flogging the physically challenged man who writhed in pain, while trying unsuccessfully to beg them or escape the assault.

This happened on the road just behind a parked military police patrol vehicle with residents of the area and passersby watching helplessly.

The soldiers eventually abandoned the man by the roadside and left him in the Military Police Pickup van.

The video, which adds to the growing list of cases of military brutality, has gone viral with many Nigerians calling for those behind the act to be identified and punished.https://punchng.com/video-soldiers-brutalises-physically-challenged-man-onitsha/