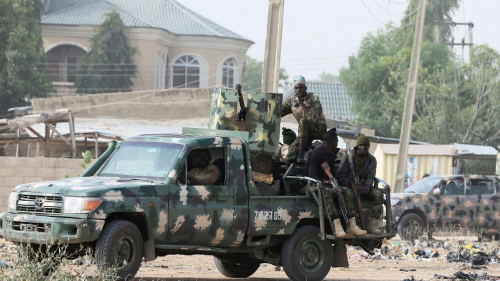 A resident of Oyigbo in Rivers State has accused the soldiers stationed in the town of serious misconduct and human rights violations.

Citing a recent case of harassment, the resident, who asked not to be named, said some soldiers arrested a 20-year-old student and shaved his head.

“On October 26, 2021, some soldiers stationed at the express arrested a boy who had a decent-looking dreadlock and shaved his head with a razor blade and scissors. He did not do anything to them. The soldiers were just not comfortable seeing young men on dreadlocks,” he said.

The soldiers, according to him, stopped the young man and asked where he was heading and why he had dreadlocks. Before he could think of what to say, they ordered him to sit while they shaved his head.

He said soldiers had always harassed young people living around the Oyigbo express junction, sometimes extorting money from them and seizing their phones.

“In recent times, what most of these soldiers do is call young boys and seize their phones from them. They also collect money from these men. They don’t do it in the open so their bosses will not be aware,” he said.

“Last week Wednesday, at about 9:30 pm, the soldiers ordered everyone at the express junction to close their shops. While people were packing their goods back into their shops, the soldiers began to beat many of them with a horsewhip.”

The Oyigbo resident also said young men moved freely in the town before the soldiers arrived, but their presence has put an end to the peace and freedom the community enjoyed.

When FIJ reached out to Onyema Nwachukwu, the spokesperson for the army, he said the issue would be addressed with immediate effect, adding that the last time he heard of such an incident in the town, the soldiers involved were withdrawn.