Woman brutalised by soldiers in Ikorodu 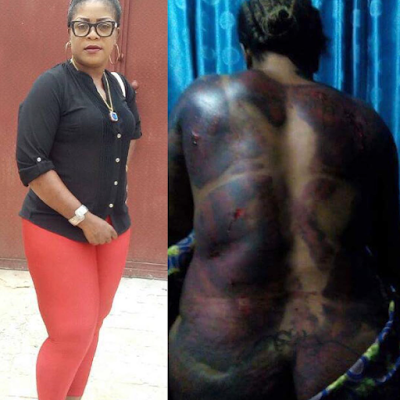 It was unmistaken over the telephone that Mrs. Ruth Orji’s had been crying all day. Her voice clearly conveyed misery.

One could not also miss the fact that her grief was both physical and emotional.

In a grave, broken voice, Orji, a mother of three, said she thought she was going to die the night she was  flogged like a hapless animal by military officials attached to 174 Battalion, Ikorodu, Lagos.

Amid her sorry state, she managed to narrate how it all happened, “I still remember all that happened that day; my two brothers and I had attended a birthday party at a hotel, Sheriff Hotel, along Sagamu Road, Ikorodu. Apparently, a fight had broken out in the neighbourhood which we knew nothing about; there were policemen around – I believe to calm the situation. It was about 8:30pm at night; my brothers and I had packed our vehicle outside the hotel. On getting to the gate of the hotel, we asked the gateman to kindly open the gate so we could leave. Just as he opened, a military officer approached us and began to flog my brother and other persons waiting at the gate. I pleaded with him to stop flogging while explaining to him that we were innocent and knew nothing about the fight that broke out. Then he slapped me on the face; I was shocked. I asked him why he slapped me and he slapped me again on the face.’’

She took few minutes to relax her nerves before continuing: “I told him that on Monday (the following day), I would be at his barracks to report his action. Then another military official dragged me from my brothers and pushed me into one of the two patrol vans parked. One of my brothers succeeded in escaping. I and my brother, together with other persons, were taken to their barracks. That was the beginning of my sorrow. I was flogged mercilessly by three soldiers. I kept pleading with them to have mercy on me. I begged and begged for forgiveness but they turned a deaf ear to my cries. I can still feel the strike of each stick and belt used to beat me. They used their belts to flog me for an hour. I’m in serious pain.https://punchng.com/i-begged-for-mercy-but-three-soldiers-kept-flogging-me-with-sticks-fan-belts-woman-brutalised-by-soldiers-in-ikorodu/