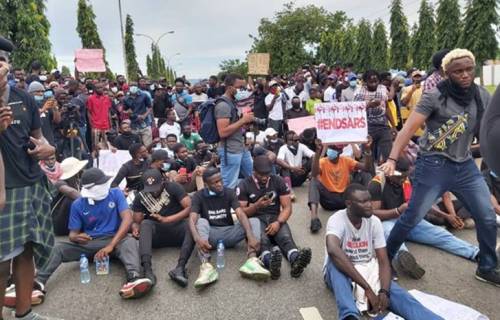 A young man, Dare Williams, and his friend are currently detained at the Kirikiri Maximum Security Prison after they were arrested by the Nigeria Police Force in December 2020 over their participation in the #EndSARS protest.

A source told SaharaReporters that Williams operated WhatsApp TV and Twitter accounts where he shared videos of events surrounding the protest.

This, according to him, led to Williams’ arrest after he shared a video of some hoodlums battering a police officer with broken bottles.

The source noted that Williams and his friend, both students of the Federal College of Education (Technical), Akoka, were arrested during a police raid in the axis.

It was learned that the young men were immediately labeled car snatchers and a false confession made by Dare Williams under duress might be responsible for the continued detention of both men.

He said, “Last year during the #EndSARS protest, Dare like every young man was active and posting videos on his Twitter and Whatsapp account. Dare Williams has a WhatsApp TV with at least 30,000 views.

“The videos posted on the WhatsApp TV, are usually watermarked with his phone number so as to get more audience so he had lots of WhatsApp contacts. WhatsApp TV audience sometimes sends in videos so there’s no way he will know everybody.

“On the 20th of October, 2020 when the shooting at the Lekki Tollgate took place, Dare left there some minutes before the shooting started. The following morning, some people sent some videos and he posted them, and there’s this particular video that was sent which showed how a police officer was killed. The hoodlums broke bottles on his head and he was pushed in a wheelbarrow.

“As someone who operates a WhatsApp TV, he posted the video on his Twitter account and watermarked it with his WhatsApp number and after this, he started receiving strange calls from unknown numbers threatening him to take down the video and that what was his business with #EndSARS protest but he didn’t pay attention to them.

”And this is how Dare scheduled his time, if he was not in school, he would either be in the studio or with his dogs. Mind you, there’s a police station close to the school; most of the officers are on WhatsApp TV, he had their numbers.

“In December, the officers were randomly picking guys on the streets. Meanwhile, a night before then, he had gone to the studio to record a new song with a course mate; the following morning while returning to the hostel, he said he stopped at UNILAG gate to get Shawarma and that was how the officers stopped Dare and asked him to unlock his phone.

“The officers didn’t even give Dare and his friend the chance to talk neither did they even inform the parents of where they were taking them to. The grandmother had gone to three different police stations before she got to know that the young men were taken to Sabo police station. The friend was allowed to call his dad and the next thing, the duo was labeled criminals and car snatchers.

“The next morning, they took Dare and his friend to the Ikeja police headquarters, the parade ground; journalists were there and upon seeing others paraded with guns and everything, Dare knew they were going to be implicated.

“From there, Dare and his colleague were transferred to Panti and when the torture was too much, they had to play by the rules and spent like two months before they were taken to court. After that, there were a series of adjournments, first sitting was on 29 December, 2nd of February, then 3rd of March yet they were not taken to court; then the 12th of April, the strike started and after that, the court sat mid of July. In August they opened the case file and in September, due to the legal week, the court didn’t sit and the young men were taken to prison.

“It was when Dare and his friend got to prison that they realized that the false confession Dare made went viral. They had no access to the phone, so they had no idea.”

“Dare also told me that their statements were written by the police so the young men did not even know what had been written for them. Human rights lawyers should please intervene”