Despite a release order from the Federal High Court, the Department of State Services has filed charges at a Magistrate Court in Abuja against the five activists arrested at the Dunamis International Gospel Centre for wearing #BuhariMustGo T-shirts.

SaharaReporters had on Monday reported that Justice Anwuli Chikere of Federal High Court while ruling on the ex parte motion filed ordered the DSS to immediately release the activists from detention.

The DSS was thereafter served the court order by the court bailiff the same day.

But the DSS claimed ignorance of the court order and hurriedly filed charges bordering on public disturbance against the young Nigerians before a Magistrate Court, Mpape according to a court document sighted by SaharaReporters on Wednesday.

The activists will be arraigned before the court today.

It was gathered that the activists were on Monday secretly taken to the same Magistrate Court to secure a remand order to further detain them without the knowledge of their lawyer.

Iwatonaiye, a blind Saxophonist, one of the detained activists, was said to have fallen ill in custody and had not been given medical attention.

The situation is giving their families and relatives a serious concern.

The activists through their lawyer had sued the Director-General of the DSS, Yusuf Magaji Bichi, the Attorney General of the Federation, Abubakar Malami, and the Senior Pastor of the church, Paul Enenche, over their illegal arrest, detention and violation of their rights.

Two days after the arrest of the worshippers, human rights activists, Omoyele Sowore and Deji Adeyanju accompanied by their lawyer, Abubakar Marshal, had met with the Senior Pastor of the church to demand their release.

The pastor was said to have confirmed that the arrest was made by DSS and absolved the church from the entire scenario. He also said he had been in touch with the DSS officials to get the young Nigerians released. 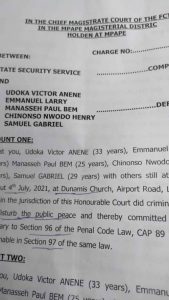 The activists were arraigned on July 28 before a Magistrates' Court sitting in Mpape, Abuja on five counts bordering on conspiracy to disturb public peace, an offence it said was contrary to Section 96 of the Penal Code Law.

The Chief Magistrate, Mohammed Zubairu, after he had listened to the defence and prosecution counsel, admitted the activists to bail in the sum of N500,000 each and with one surety in like sum who must submit their national identity cards to the court. The sureties must be residents within the jurisdiction of the court.

Surprisingly at the resumed hearing of the case on Monday at Wuse Magistrate Court following the transfer of the case, the DSS lawyer, I. Onotu was conspicuously absent in court.

The lawyer defending the activists, Tope Temokun asked the court to strike out the case for lack of diligent prosecution.

Temokun said, "We applied that the charge is struck out based on the fact that when you bring somebody to court it is not convenient, and if that person voluntarily goes to court, you that have a case against the person does not show up in court.

"We were not aware that the matter will take place here at Wuse Magistrate Court but we are still here because we are diligent enough to be at the Magistrate Court, Mpape. So if the prosecution was there, that means we would be here together. It is not about whether you have noticed or not. We did not have noticed too but they are not here.

"We applied that the charge be struck out but the Magistrate said he is going to give an adjournment at the instance of complaint."

They were finally released from DSS custody on August 3.

Justice Anwuli Chikere of Federal High Court had on July 26, while ruling on the ex parte motion filed by the activists, ordered the DSS to immediately release the activists from detention but the order was disobeyed as the DSS hurriedly filed trumped-up charges at the Magistrate Court.

The matter has been adjourned to September 20, 2021, for hearing.