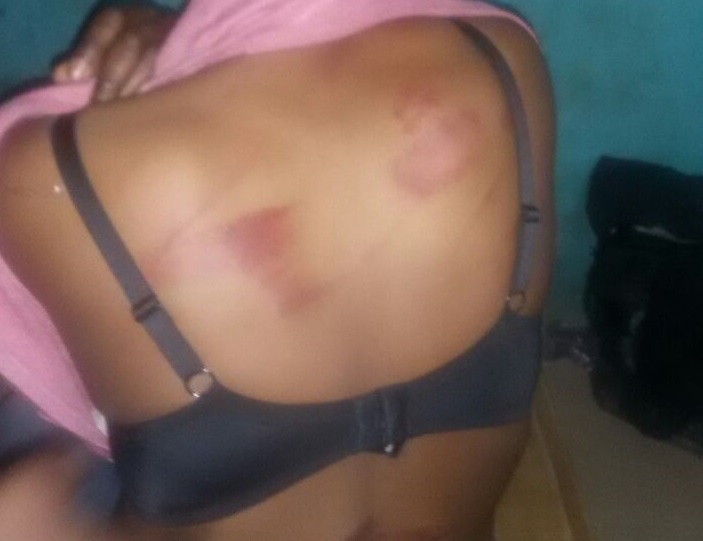 A woman, Toyin Adeleye, who returned from the United States of America about a week ago had a feel of the brutality of the Nigerian police on Friday in Ado-Ekiti State after she reportedly refused to give bribe to police at a checkpoint in the city.

The woman was manhandled along with her two-month-old baby, Heritage, and her younger brother, Adeniyi Dada, by five officers before they were detained at a police station.

The incident occurred at the checkpoint in front of the Ekiti Pavilion and a few metres from the official residence of the newly deployed Commissioner of Police, Abdullahi Chafe.

Apart from detaining their victims, the policemen also impounded the black Kia Picanto car with registration number LAGOS FKJ 221 EE which she drove while returning from the market.

The injured woman was seen breastfeeding her baby when journalists visited the police station on Saturday.

The woman’s husband, Akanni Adeyeye, while speaking to journalists, lamented the inhuman treatment meted out to his wife, pointed out that she had bruises on her face and lacerations on her body.

Mr. Adeyeye, who slept in the police station to keep his wife company, said the policemen had requested the vehicle papers and the driver’s license of his brother-in-law, who was driving the car.

He said one of the policemen withheld car documents given to them, demanding that they be “settled,”. He said the demand was rebuffed since the papers were valid.

“My wife and her brother were returning from the market at about 3.00 p.m. on Friday and on arrival at the checkpoint in front of the Pavilion very close to their station, they asked for all vehicle papers and driver’s licence which were produced and they are valid,” he explained.