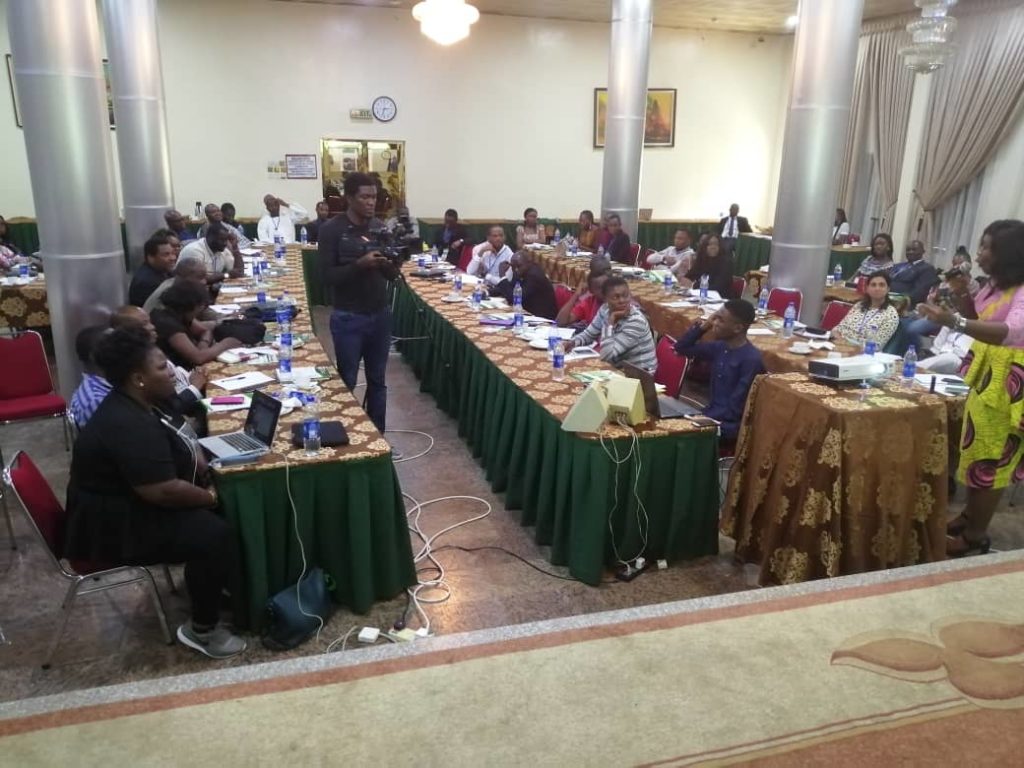 On June 20, 2019, Spaces for Change (S4C) and the Special Control Unit against Money Laundering and Terrorism Financing (SCUML) co-hosted a workshop, Combating Money Laundering and Terrorism Financing Risks in the Non-Profit Sector, which had in attendance, 62 representatives of religious groups, donor bodies, local and international non-governmental organizations operating in Nigeria’s six geo-political zones in Nigeria. Also present at the workshop were officials of federal government ministries and agencies, intergovernmental bodies, charged with the responsibility to regulate corporate oversight and combat economic and financial crimes such as the Corporate Affairs Commission (CAC), Federal Ministry of Justice, Economic and Financial Crimes Commission (EFCC), Nigeria Financial Reporting Council, Federal Ministry of Economic Planning and the Intergovernmental Group against Money Laundering in West Africa (GIABA).

In 2016, Nigeria published a National Risk Assessment (NRA) on Terrorist Financing (TF) and Money Laundering (ML), which identified Designated Non-Financial Businesses and Institutions (DNFIs) as being amongst those sectors most vulnerable to money laundering (ML) and terrorist financing (TF). Nigerian law classifies non-profit organizations (NPOs) as a subset of DFNIs. In a report released in March 2019,  Unpacking the Official Construction of Risks and Vulnerabilities for the Third Sector in Nigeria, S4C conducted an extensive analysis of the NRA and challenged the assessment of risks for the non-profit sector, disputing the official classification of NPOs as DNFIs and teased out the nuances between vulnerability and threat, among other issues.  It further assessed the adequacy of the legal framework for combating ML/TF risks in the non-profit sector.  The report aroused the interest of national AML/CFT regulators in Nigeria, generating intense debate, feedback and engagement between national security stakeholders and non-profit organizations (NPOs).

SCUML is the AML/CFT regulator for DFNIs in Nigeria. The June 20 meeting in Abuja which S4C co-organized with the SCUML was a logical follow-up step towards consolidating the interest the report generated within the national security architecture in Nigeria. The workshop was designed to deepen understanding of the risks of money laundering and terrorism-financing in Nigeria’s non-profit sector and at the same time, enhance AML/CFT compliance culture within non-profit entities.

Mr. Francis Usani, the SCUML director’s opening remarks enlightened participants on the links between rising corruption levels in the country and terrorism financing, elucidating the role of the agency in combating such crimes. The chances of success for SCUML’s regulatory role are heightened by the cooperation and watchdog interventions of non-profit organizations; hence the need for collaboration and constant engagement. The presentations that followed the opening remarks shed further light on the nature of AML/CFT regulations, the scope of their applicability to the NPO sector, and the ingredients of effective engagement between the civil society and AML/CFT regulators.

The first presentation, Overview of the Relevant International Standards on AML/CFT as it Relates to NPO, by Ibinabo Mary Amachree, Head of Information and Data Management at SCUML, introduced basic norms, international legal standards and the institutions—like the Financial Action Task Force (FATF) —responsible for promoting effective implementation of the legal, regulatory and operational measures for combating ML and TF.  Just like the first paper, the second presentation, Nigeria’s Anti Money Laundering/Countering Financing of Terrorism Regimes, by Temitope Erinomo, NPO Desk Officer at SCUML, enriched participant’s understanding of the Nigeria’s AML/CFT regimes, most of which were influenced by the FATF recommendations. They include the Money Laundering (Prohibition) Act, 2011(as amended), Terrorism Prevention Act 2011 as amended, Companies and Allied Matters Act (CAMA) & Company Regulation 2013, Financial Reporting Council Act, 2011 and Not-For-Profit Organization Governance Code 2016, Federal Inland Revenue(Establishment) Act, Ministry of Budget and National Planning Act 1993 etc. A number of provisions within these statutes apply to NPOs and other entities. For instance, the Money Laundering Act criminalizes any individual cash payment exceeding Five Million Naira. It also requires financial institutions (FIs) and Designated non-Financial Institutions (DFNIs) to report any lodgment or transfer of funds in excess of Five Million Naira to the EFCC within seven days. Not only that, non-profit entities have additional legal responsibilities to identify their customers/beneficiaries, preserve records, report suspicious transactions, including registering of DNFIs with SCUML.

The next presentation, Nigerian National (ML/TF) Risk Assessment Process, Findings and Action Plans, delivered by Hadiza Gamawa Zubairu, Head of External Cooperation Department at the Economic and Financial Crimes Commission (EFCC), delved deeply into the national risk assessment of ML/TF which Nigerian conducted before 2016, flagging the risks elements existing within the financial and non-financial systems. This NRA typically assesses the threats and vulnerabilities within different sectors of the economy using a risk-based approach, and then deploys resources to mitigate identified risks.  It is also intended to evaluate a country’s existing ML and TF regimes to determine if they are sufficient and effective enough to tackle financial crimes and terrorism risks. Such NRAs are required for member countries and states seeking admission into the FATF body. It serves to demonstrate to the body that the government in question has adequate understanding of the risks associated with ML and TF within the various sectors of its economy. As such, NRA can be described as an elaborate exercise involving different stakeholders over a period of months.

The World Bank tool was utilized for Nigeria’s assessment due to the nature, size and complexities of the country’s political structure, financial sector and economy and the tool’s excel based model, useful for identifying drivers of ML/TF. The tool also comprises of interrelated modules built on input variables that represents factors related to money laundering threats and vulnerabilities. The Nigeria NRA team consisted of nine multidisciplinary working groups with experienced professionals drawn from various ministries, departments, and agencies, including the private sector.  Part of the assessment involved collecting quantitative data from regulatory bodies and private entities, field survey executed through the use of questionnaires and focus group discussions that interviewed participants across the six geopolitical zones of the country. Additional information was also gotten from secondary sources like annual reports and other sundry publications.

In the next presentation, Risk Assessment of NPOs – Theory and Practice, Sangeeta Goswami of the Netherlands-based Human Security Collective (HSC) and the Global NPO Coalition on FATF,  shared numerous case studies from various jurisdictions that undergird the importance of tackling money laundering and terrorism financing from the angle of a risk-based approach in compliance with the FATF’ Recommendation 1. The promotion of well-regulated financial systems is central to any effective and comprehensive AML and CFT regime. Consequently, there is a need for countries to identify, assess and understand the specific ML and TF risks prevalent in various sectors of their jurisdictions in order to effectively manage dangers and appropriate measures commensurate to identified risks. This approach not only ensures that commensurate measures are employed, but also influences the efficient allocation of resources in the fight against corruption.

In the case of NPOs, any any credible risk assessment has to identify the sub-set of NPOs most at risk of being abused for TF. Also outlined was the impact of over-broad regulation and oversight, which is not risk-based, on the operational space of NPOs, impacting, among others, the freedoms of expression and association, the financial inclusion agenda, the rollout of the SDGs, the countering violent extremism agenda and effective programming in general.This approach is also espoused in FATF’s recommendation 8 which requires countries to specifically understand the vulnerabilities of NPOs to TF threats. This is crucial in order to ensure that organizations are not caught in blanket classifications that might restrict their operational space, freedoms of expression and association.  The need for government outreach to, and engagement (sustained, continuous) with the sector was also a point strongly made.In addition to dealing with ML and TF risks, governments must plug the gaps in communication with NPOs by raising awareness on the drivers behind AML/CFT regulations and convene capacity building sessions that promote a multi-stakeholder dialogue between the non-profit sector and government.

Short interventions by Mr Oluseyi Oyebisi Babatunde of the Nigerian Network of NGOs (NNNGOs) and Victoria Ibezim-Ohaeri of  Spaces for Change, provided deep insights into how AML/CFT regulatory  engender restrictions on the civic space. Mr. Oyebisi urged the government to understand the disparate organizational characteristics NPOs operating in Nigeria, as this would help enhance compliance with the risk-based approach.  On the other hand, Ms. Victoria Ibezim–Ohaeri proffered recommendations for improving Government–NPO relations in combating ML/TF.  Communication gap was cited as one of the biggest obstacles impeding government-NPO relationships, leading to suspicion on both sides. For instance, AML/CFT regulators are unaware of existing reporting practices to donor bodies in the sector, and tend to introduce legislative measures that reinvent the wheel, instead of leveraging industry best practices to heighten transparency and accountability in the sector. Related to this is the one-size-fits-all and sledge-hammer approach in the execution of AML/CFT measures, which often result in blanket restrictions across the entire sector without regard for the distinct NPO characteristics and varying TF risk exposure levels. Additionally, unfounded stereotypes or myths about NGOs inform a negative perception of the sector in the eyes of government officials.

The workshop wrapped up with a presentation from Mr. Francis Usani, SCUML director on the –FATF/GIABA 2nd Round of Mutual Evaluation of Nigeria and the Role of the NPOs. Nigeria was supposed to undergo a second round of mutual evaluation two years ago but was unable to scale through due to some technical details. This time around, the NRA has been conducted and regulations enhanced for better efficiency. The country hopes that the latest efforts in implementing global AML/CFT standards will yield a favorable rating from both the FATF and GIABA.

The presentations provoked interesting conversations and debates which helped in deepening understanding around issues of NPO regulation and oversight, and building consensus around key issues to ensure that any mitigating measures put in place as a result of the NRA or following on from the Mutual Evaluation do not impact legitimate NPO activity. A lot of participants acknowledged they were learning about the NRA for the first time, and appreciated the informative papers that opened their eyes to their reporting obligations under extant laws. One major highlight of the workshop was the amnesty granted to non-profit organizations who were yet to comply with the submission of reports of activities to relevant agencies like SCUML. NPOs willingness to comply with the AML/CFT regulations reinforce the opening statement by S4C’s director, Ms Ohaeri, when she stated that the civil society is an ally of the government in the fight against money laundering and terrorist financing.

Nigeria is in the process of preparing for its FATF Mutual Evaluation, with an onsite visit scheduled for September 2019. The Nigerian civil society is fully committed to supporting and making meaningful input into the evaluation process. This workshop forms part of S4C’s broader effort toward bolstering the capacity of the Nigerian NPO sector, to provide input into the FATF mutual evaluation processes. Open Society Foundations and the Fund for Global Human Rights provided the support for this convening.