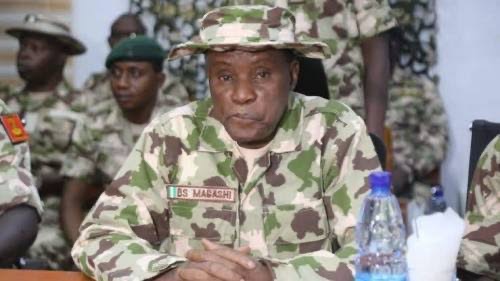 Magashi slammed the peaceful protesters, saying the military and the government would not allow another round of protests to happen, because of the “unpatriotic elements” infiltrating the protesters.

Magashi slammed the peaceful protesters, saying the military and the government would not allow another round of protests to happen, because of the “unpatriotic elements” infiltrating the protesters.

According to TheCable, the defence minister stated these on Saturday in reaction to the #OccupyLekkiTollGate protest.

At the Saturday morning rally, more than 30 protesters, including Debo Adebayo, a Nigerian comedian, better known as Mr Macaroni, were arrested by security operatives.

The protesters have, however, been arraigned before a mobile court in Lagos, and granted bail.

Speaking on Saturday after participating in the All Progressives Congress’s revalidation exercise in Kano State, the minister alleged that some of the protesters are rogues and thieves.

He said, “This #EndSARS issue, if you recall, the minister of information has briefed this nation and alerted that something like this is coming; and we know we are always prepared. This is our job to ensure internal security.

“You know the composition of the EndSARS crowd. Over 60 per cent of them are people who don’t even know why they are there. They just come to take part. Some of them are rogues; some are there to steal. They want to do whatever they think.”

The minister added that the government would not allow “unpatriotic elements” to destabilise the country under any guise.

“Whoever is involved in this #EndSARS issue, the military and the government will not allow it to happen. But we will be as good as any other citizen to protect this country.

“We are not going to be harsh on anybody. We will maintain the law and peace to the best of our ability. We can use force when it is required. We can use minimum pressure, commensurate with what is seen on the ground. And that is where some people are getting it wrong.”