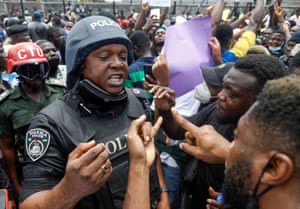 Nigeria’s army has warned it could step in against “subversive elements and troublemakers” as the protests against police brutality that have erupted throughout the country over the past week continue.

Thousands of mainly young people have taken to the streets to protest against the notorious Special Anti-Robbery Squad, commonly known as Sars, long accused of unlawful killings and abuse, and against wider police brutality. At least 10 people have died and dozens injured in the demonstrations, which have been met with force by police units.

In response to what has become one of the most significant protest movements in Nigeria in decades, the authorities this week announced that Sars would be dissolved. A new unit, the Special Weapons and Tactics (Swat) team, was announced. But protests have continued to escalate, with many demanding the government commit to prosecuting Sars officers and compensating victims.