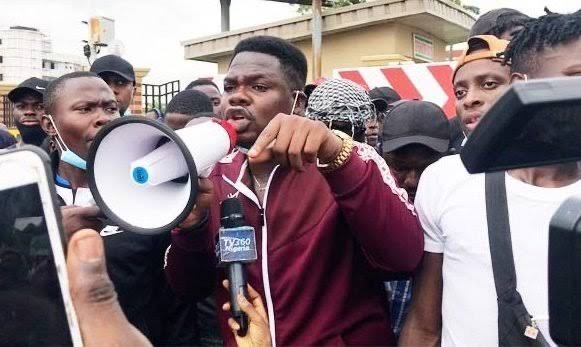 Nigerian comedian Debo Adebayo, popularly known as Mr Macaroni, has been arrested by personnel of the Nigerian Police Force at the on-going #OccupyLekkitollgate protest in Lagos.

Adebayo was seen detained in a Black Maria in a live video on his Instagram page. A Black Maria is a police vehicle for transporting prisoners.

The comedian was arrested alongside other protesters in the early hours of Saturday and his live streaming from the Lekki tollgate was stopped as police officers snatched his phone away from him.

The Nigerian Government and police has said they would not tolerate another #Endsars protest in the country.

Nigeria’s minister of information Lai Mohammed at a press conference on Thursday said the government “strongly warn those who are planning to re-occupy Lekki Toll Gate on Saturday to desist.”

Some Nigerian youths have scheduled a new protest tagged #OcuupyLekkiTollgate for Saturday over the handover of the Lekki toll gate, where Nigerian forces opened fire on unarmed protesters last October, to its owners Lekki Concession Company.

Members of the judicial panel set up by the Lagos State government to investigate the October 2020 Lekki shooting voted 5-4 in favor of the handover on Saturday.

The youth, however, kicked against this decision by the Judicial panel to hand over the toll gate back to LCC for repairs and to begin operations without granting justice to the victims of the October 20 incidents.