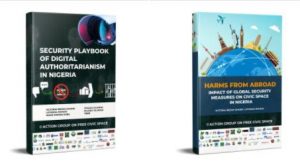 According to Oluseyi Olufemi, an AGFCS researcher from Dataphyte who read the press statement for the day and presented findings from the research, the reports reflect findings from a three-part research study that examines the phenomenon of digital surveillance, overapplication of security infrastructure, use and misuse of digital technologies to snoop on citizens, clamp down dissent, block internet access, intimidate political opponents and generally, stifle voices of civic actors in Nigeria. Mass surveillance programs in Nigeria are not only bolstered by the absence of checks and balances in government but also, by telecommunication companies, internet service providers, content moderation platforms, private and foreign companies that trade off sensitive data of citizens and provide spyware technologies that allow state actors to monitor citizens.

Culpable foreign suppliers uncovered during the research reports and indicted of supplying surveillance technologies and services to the Nigerian state include Circles, an Israeli-owned company; U.S based Access Data Group, China’s ZTE Corporation, Cellebrite, Elbit Systems, Romix technologies, and Packet Technologies AD.  Even though mass surveillance practices violate the right to privacy as guaranteed in sections 39 and 40 of the 1999 Constitution as amended, weak data laws and, vaguely worded provisions contained in multiple legislation such as the Cybercrime Act, Terrorism Prevention Act, Nigeria Communications Act 2003 amongst other laws enable state actors to achieve surveillance objectives couched under the pretext of preserving national security and citizens’ interests.

Also presenting key findings of the research at the event, Ms. Victoria Ibezim-Ohaeri, Executive Director of Spaces for Change reflected that the research also examined the root causes of securitization of the civic space. Even though the massive deployment of security resources in the country are fuelled by rising security challenges that cut across Nigeria’s six geopolitical zones, the AGFCS research findings revealed that state actors are latching on to the mantra ‘‘nation security and public safety’’ to control public behavior and effect policies that constrict the civic space and infringe on civil liberties.

Besides the rising state of insecurity in the country, the global pressure to implement transnational norms and measures against terrorism stands out as another major driver of the securitization of civic space in Nigeria. Three major institutions and mechanisms identified by the research that has influenced and impacted the trajectory of Nigeria’s security outlook on terrorism include the United Nations Security Council, United Nations Global Counter-Terrorism Strategy and, Financial Action Task Force. These three mechanisms among other global institutions dictate the standards for countering terrorism and money laundering worldwide. As such, states are expected to comply with these standards regardless of their sovereignty or face dire consequences attached to non-compliance. It is the struggle to implement these norms that produces tensions in the civic space as often, states authorities use them as excuses for expanding their powers especially in situations where the concept of national security cum public safety/interests are ambiguously defined. For instance, while terrorism poses a huge threat to the sovereignty of any state, it lacks a clear definition globally thus creating a lacuna for illiberal states to apply overreaching measures that restrict the democratic rights of civic actors in the guise of countering terrorism. In Nigeria, these antics of mischievous state authorities have manifested in the militarization and criminalization of protests and dissent, labeling of free speech and harmless rhetoric as hate speech, the indiscriminate arrest, and brutalization of journalists for covering organized protests and, reporting news related to security and military operations,  undue blanket restrictions -multiple registration controls – onerous reporting requirements, deregistration, and defamation of nonprofits organizations, especially those working in the country’s wartorn zones.

Ms. Tobi Ayodele and Mr. Funsho Martins, AGFCS researchers from Vision Springs Initiative (VSI) and, The Initiative for Equal Rights (TIERS) also looked at the nature of rights violations arising from digital insecurity and surveillance, counter-terrorism, and national security practices. Women activists interviewed across the six geopolitical zones in Nigeria, especially those who participated in the popular protests against police brutality (#EndSARS) in October 2020, shared stories of how they were slut-shamed on the internet, arrested, and accused of trying to undermine national security. Also, the Companies and Allied Matters Act, (CAMA)2020, was flagged for containing controversial provisions as in Section 839 of the Act that grants the Commission the power to suspend trustees of an association and appoint interim managers to manage the affairs of an association where it believes the organization may have been guilty of practices of misconduct and mismanagement. Failed nongovernmental regulation bills reviewed in the country’s legislative house in the past had sought to require NPOs to reveal sources of funding, program areas, etc. Given the existence of the Same-Sex Marriage Prohibition Act that criminalizes association between persons of same-sex, legislation such as CAMA 2020, any bill to regulate NGOs could restrict legitimate operations of nonprofit organizations focused on empowering gender and sexual minorities.

Other AGFCS researchers such as Mr. Okechukwu Nwanguma of Rule of Law and Accountability Centre, Mr. Justin Gbagir of Justice Rights Initiative and, Fyneface Dumnamene of Youth and Environmental Advocacy Centre flagged the government’s penchant to criminalize and classify self agitation movements such as the Indigenous People of Biafra (IPOB) and Oodua Nation Movement among others as terorrism instead of addressing the legitimate grievances of citizens and root causes of ethnic tensions.

In light of the findings from the research, AGFCS researchers charged the Nigerian government and state actors to desist from violating the rights of citizens on account of preserving national security. Participants at the event also deliberated on entry points and opportunities for reforming the security architecture and defending the civic space in Nigeria.