Anger, Trauma over Years of Tensions with Police in Lagos Suburb 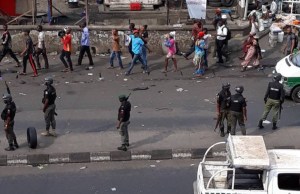 Lagos, Nigeria – It was 1 pm on October 20 – just hours before the now-infamous deadly Lekki tollgate shooting – when another police shooting took place in Mushin, a bustling, lower-income neighborhood some 20km (12.4 miles) away.

That morning, protesters in Mushin had joined nationwide calls demanding an end to the rogue police unit, the Special Anti-Robbery Squad (SARS), known for its brutality and extrajudicial tactics. Hundreds gathered at Agege Motor Road, shutting down a major intersection that passes through Mushin from Ikeja, the state capital; while smaller protests broke out in the arteries of the neighborhood’s streets.

Everything was festive among the crowd, who had their fists raised, chanting “End SARS” and singing along to lyrics by Fela Kuti, witnesses told Al Jazeera, when suddenly the atmosphere turned at a protest site closest to the Olosan Police Station, and an altercation occurred. It is unclear what sparked the clash, but residents said police opened fire, dozens were left wounded, and at least 10 people died, according to witnesses and local news reports.

MushinToTheWorld Foundation, a community-based NGO that works for social change in the area, issued a news release five days later saying there were 67 casualties, including 15 deaths. Babatunde Enitan, the executive director, told Al Jazeera they arrived at their figures by sending a field agent to the hospitals where the victims had been taken. However, the Nigerian government has not released any official statement related to the Mushin incident, and the Lagos state police’s public relations officer, Muyiwa Akinjobi, categorically denied the shooting took place. “We are not aware of such [shooting],” he told Al Jazeera on the phone on November 4, adding that social media posts and local news reports were false.

Some witnesses to the incident said that after the shooting, police tried to disperse protesters and clear the street, likely in anticipation of a curfew that had been announced earlier. But the gunshots caught the attention of local “area boys” – typically unemployed young men, some of whom live on the streets in lower-income neighborhoods in Lagos. The area boys then got involved in a confrontation with some officers, and proceeded to attack the police station with knives and broken bottles, in a failed attempt to raze the building, witnesses said.

Patrick*, who asked that his real name not be used for fear of retribution, runs a printing shop in Mushin. He watched the clash from a relatively safe distance, outside his shop at the other end of the street. Although he could not see the police station directly, he said he saw area boys throwing bottles at the policemen who responded by shooting directly at them. When the clash moved closer to him, to a nearby street corner, he stood on the pavement and watched, while other residents observed from balconies. Many shop owners closed early and went home for the day, he said.