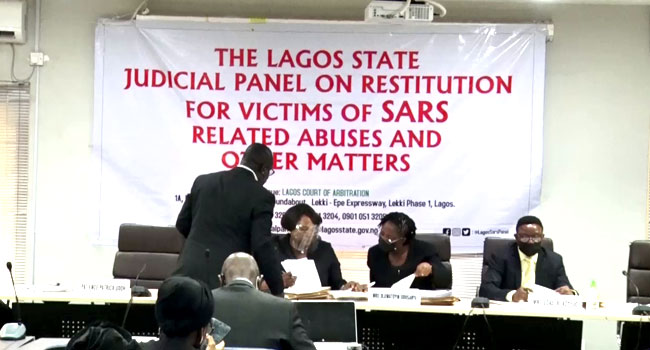 The Lagos State Judicial Panel Of Inquiry set up to address the issue of police brutality has suspended its sitting until further notice.

The Chairperson of the panel, Justice Doris Okuwobi (retired), announced this on Saturday.

The panel was expected to conclude its sitting on October 19.

This is coming hours after a member of the panel, Ebun-Olu Adegboruwa (SAN), raised an alarm of plans to frustrate the team of reaching a meaningful conclusion on investigations into the October 20 Lekki Toll Gate incident.

“EndSARS Panel Being Frustrated; there are attempts to frustrate the EndSARS Judicial Panel from reaching meaningful conclusions on investigations into the Lekki Toll Gate Incident of 20th October 2020. I will give details subsequently,” he posted on Facebook.

In October 2020, many Nigerians took to the streets to demonstrate against police brutality under the #EndSARS campaign.

The demands led to the disbandment of the special anti-robbery squad (SARS) of the Nigerian Police Force.

On October 19, 2020, the Lagos State Government set up the judicial panel of inquiry and restitution to investigate cases of human rights abuses by operatives of the now-disbanded SARS and other security agencies.

This was a sequel to the directive of the national economic council (NEC) that mandated states to set up panels to investigate police brutality in the wake of the #EndSARS protests.

The panel was given a mandate of six months to hear petitions submitted by members of the public, while a total of N200million was earmarked as compensation.

The panel’s sitting ought to have ended on April 19, but was extended by three months till July 19.

It was subsequently granted additional three months for hearing of petitions and was expected to conclude its sitting on October 19.