Lawyer Loses Eye after being Battered by Police Officers 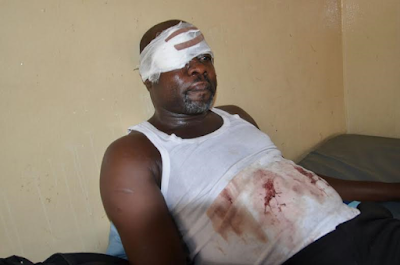 The 42-year-old Elimihe, narrated the power-drunk police officers had stopped him in front of the Onipanu Police station and demanded to see his vehicle particulars and other papers and after he showed them the items, they were still not satisfied and went ahead to demand that he gave them some money which he refused and they went into an overdrive mode and almost snuffed life out of him.

“I was on my way from Lekki where I went to check a property with my client. I decided to use the Onipanu police station road by Apata. Immediately I drove into the street close to the station, one stopped me and demanded my vehicle particulars.

I gave him; he demanded a Driver’s License, I gave him. When he discovered I did not commit any offence, he asked for my tinted glass permit, which I gave him.

He told me I was using a forged tinted glass permit. I told him I could not have forged a police document as a lawyer. He became furious and said he was going to arrest me. He jumped into my vehicle and insisted I must give him N1, 000 to bail myself. I said I was not going to give him any money since I have not committed any offence.

“He pounced on me and cocked his gun threatening to shoot me if I make a move. Another policewoman who sighted us came and dragged the gun from him.

The policeman after being disarmed, descended on me and gave me the beating of my life. He pushed me into the cell and another policeman came inside the cell, locked up the cell and beat me for 30 minutes.

I was humiliated like a common criminal. This is oppression and one of my eyes is partially blind. I have been vomiting blood since yesterday. It was the intervention of a good policeman in the station who warned them not to kill me. I would have been dead by now.”