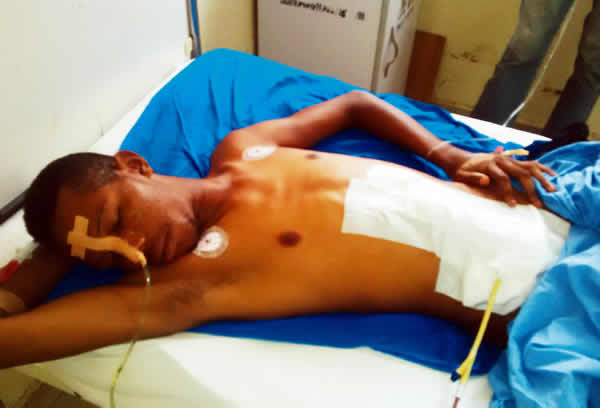 A 22-year-old 200-level undergraduate, John Ekefre, is currently battling for his life at the Lagos State University Teaching Hospital after policemen from the Iponri division brutally tortured him and damaged his intestine in the process.

The Punch Newspaper reports that the young man had to be operated upon to rectify the internal injury he sustained and to remove blood clots that blocked his chest as a result of the excessive torture he received from the police officers who arrested him on his way to a church programme and accused him of armed robbery.

It was gathered that Ekefre, an appendicitis patient who works in a cinema house in Surulere, and four other friends were going for the church programme tagged, ‘The Experience’, organised by the House on the Rock at the Tafawa Balewa Square, Lagos Island, after they had closed from work around 11pm on Friday, December 4.

He narrated his ordeal from his hospital bed:

“I work at a cinema in Surulere. We were on afternoon duty that fateful Friday. We closed around 11pm and left for TBS to attend a church programme – The Experience 10.

When we got to Costain, we alighted from the bus we boarded because there was gridlock. About five policemen on patrol stopped us and we told them we were going to the church.

They searched our bags, but nothing incriminating was found there. They forced us into their bus. We showed them our identity cards, but they ignored us.

On our way to the station, I asked them what our offence was and they said we were highway robbers. When we got to the station, they dragged me down, beat me up and one of them hit me in the stomach with the butt of his gun.

They said I was too inquisitive. The following day, they collected N6,000 from my brother before I was released.”

His elder sister, Mercy Ekefre, said the family had spent over N200,000 on his treatment so far.

“The doctor said his intestine was ruptured and that he had a blood clot. He had surgery and we are still awaiting the medical report.”