Man Narrates How “Anti-cultism” Police In Gbagada Unjustly Arrested Him 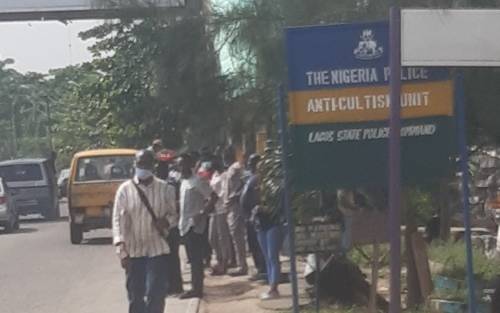 Nigerian, identified as David, has narrated his ordeal in the hands of the police during one of their raids in Lagos.

David, who recounted his experience on Twitter, said the police were unprofessional in their conduct. He said he was arrested by the operatives of the “Anti Cultism Unit” when he went to cut his hair. The policemen, he said, took him to their unit in Gbagada. David said he spent the night and was bailed the next day by some of his friends with N10,000.

David revealed that the officers arrested some other Nigerians from different parts of the state who have a similar tale of human rights abuses to share.

He said “I left my house around past 6 pm yesterday to get plastic buckets for a friend because he just moved into a new apartment around Gbagada. On returning, I visited a salon to have my haircut around past 7 pm. I was done with my hair by quarter to 8 pm then paid and left. I got across the road to take the tricycle from the salon to where I stay.

“Suddenly, I saw four men in black, boldly written on their shirt “Anti Cultism Unit” with guns. Then one of them grabbed me from the waist; he said I should get into the bus. I asked why and he said that I should get inside.

“I obeyed and entered (before I start receiving slaps). Then I was searched. They said I should give them my phone. I refused and said that it was private. They said I should not call anybody nor use my phone. A few minutes later, a call from my office came in. I picked the call but my phone was snatched from me.”

David further recounted his experience at their unit in Gbagada. He said, “I saw a lot of people. I overheard some saying they picked them from Ikorodu, Onipanu, Mushin, Oshodi, Bariga & Ketu etc.

“One of the girls said she had been there for two days now because she didn’t agree to sleep with one of the policemen. We were treated as criminals; they took us to the passage of the cell, told us to sit on the floor, while more people were brought in. I woke up more than 20 times to find out it was still 3 am.”

I was finally bailed by both of my friends that have been trying to reach me all through yesterday till today.