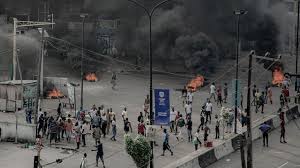 Two youths were on Tuesday shot dead at the New Tire Market Area of Nkpor, Anambra State by the Policemen enforcing the restriction movement over the Coronavirus pandemic.

However angry residents of the area embarked on a protest against the shooting to death of two youths by Police over an argument. According to an eye witness, one of the two victims died instantly, while the other one was said to have died at an undisclosed hospital where he was rushed to.

The angry residents blocked the Onitsha Enugu Expressway area of New Tire Market making a bonfire thereby, disrupting vehicular and human movement into and out of Onitsha from Nkpor Area of the state.

According to an eyewitness, the youths were said to be drinking beer in front of a beer parlour in their yard and the policemen on patrol drove in and ordered them to go into their houses.

The youths according to the eyewitness were said to have told the policemen that the place is their yard and why must they be ordered into their rooms, asking the Police if the restriction of movement involves people not coming out in front of their yard to stay.

The question by the youths was said to have angered the policemen and they started threatening to shoot the youth and the noise generated by the Police threat attracted other people whom the policemen also ordered to leave the scene or be shot.

While the other where said yo have left, the youths insisted that since they are in their yard, the police cannot rush them into their rooms particularly when there is no power supply.

At that point, the policemen were said to have opened fire on them and hurriedly jumped into their patrol van and zoomed off when they saw the lifeless bodies of their victims on the ground.

Contacted the police spokesperson, in the state, Haruna Mohammed, confirmed the incident, describing it as an unprovoked attack on the Police patrol team.

“It was an unprovoked attack on Police patrol team with substance suspected to be acid by some miscreants.

“Yes, they snatched the rifle of the Policeman after pouring acid on him which prompted the other policemen to use force and retrieved the rifle.”