UNGA 72: Safeguarding the Legal, Political, and Operational Space for Civil Society and Other Local Actors 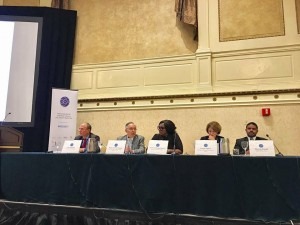 SPACES FOR CHANGE’s presented its recent research findings on closing spaces in Nigeria at the Global Solutions Exchange’s (GSX’) high-level panel at the sidelines of the 72nd UN General Assembly meeting held in New York between September 16-22, 2017. The panel discussion on “Safeguarding the Legal, Political, and Operational Space for Civil Society and Other Local Actors to Engage in Preventing Violent Extremism (PVE)”  examined how the shrinking of civic space affects practitioners, organizations and networks involved in the delivery of successful PVE interventions, and the strategies adopted to overcome the challenges.  The convening brought together a wide range of local and national civil society actors from across the world to interact and share strategies with each other and with representatives of Member States attending the UN General Assembly, as well as UN officials and experts, including from the newly established Office of Counter-Terrorism.

Beginning from November 2016, S4C launched a research advocacy campaign that is digitally tracking, documenting and reporting incidences of closing spaces for civil society in Nigeria.  In this regard, S4C has tracked 103 incidents of activists, civil society organizations (CSOs) and their activities being closed, repressed, or obstructed. The affected CSOs were mainly those critical of the government, political opponents, leaders of religious or indigenous movements, or those exposing corruption or gaps in governance.

Measures designed to counter money laundering (ML) and the financing of terrorism (CT) often provide an omnibus cover for dissembling initiatives designed to shrink civic spaces.  Although unsupported by evidence, these measures tend to re-echo sentiments suggesting that non-governmental organizations (NGOs) are “vulnerable to terrorist abuse or are “enablers for funding terrorist groups.” As a result, the legal regimes designed to curb anti-money laundering (AML) or for combating financing of terrorism (CFT) in Nigeria, have been revised in ways that impose restrictions on non-profit organizations (NPOs).

S4C spoke about how terrorism and other national security concerns are often used as an excuse for introducing or adopting restrictive legislations such as the pending draft NGO Bill.  The Bill proposes to create an NGO Regulatory Commission that would undertake a number of statutory functions such as overseeing the finances and operations of non-profits, licensing NGOs, and deciding which NGOs to license and which not to. If this NGO bill passes, it will not only reinforce the surging restrictions on civil society and charitable activities in the country, but also arm state actors with the tools to further stifle criticism and tighten access to civic space.

Nigerian CSOs, including S4C, are resisting the draft NGO bill. S4C is primarily using research to influence public policy, shape public opinion, and present the evidence needed to counter the official justifications for the restrictions on civic spaces.  Participants discussed the importance of putting in place legal frameworks that allow CSOs to conduct their important work free from government obstruction. These frameworks need to be backed by financial support and political will from the government and CSOs need to feel secure when engaging in the political sensitive PVE space.

The event started with a high-level opening panel featuring presentations and  remarks from ministers and senior officials from a select number of countries such as Anders Samuelsen, Minister of Foreign Affairs of Denmark, Ambassador Manuel Sager, Director General of the Swiss Agency for Development and Cooperation, Director for Conflict Prevention and Security Policy, External Action Service of the European Union (EU), Pawel Herczyński among others. Marking one year since the launch of the Global Solutions Exchange (GSX) at the opening of the 71st UN General Assembly (UNGA), this one-day event during the 2017 UNGA High-Level week highlighted the recent progress in advancing a “whole of society” effort to preventing and countering violent extremism, with a particular focus on the contributions and innovative solutions of civil society and other local actors, the critical gendered dimensions of PVE, and the need to ensure local actors have the necessary political and legal space to contribute to PVE.