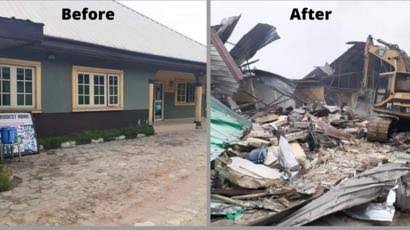 The attention of Youths and Environmental Advocacy Centre (YEAC) has been drawn to the reaction of the Executive Chairman of Eleme Local Government Area, Hon. (Barr.) Philip Okparaji to our press statement titled “ADVOCACY CENTRE DETERMINES THE TRUE OWNER OF PRODEST HOTEL, ELEME; CALLS FOR THE SANCTIONING OF ELEME LGA CHAIRMAN FOR MISINFORMING GOVERNOR WIKE” on NAIJA, 92.7FM, BEAT, 91.1FM, etc. Port Harcourt on Tuesday, May 19, 2020.

Our said statement of May 18, 2020 summarized findings from Prodest Hotel and Corporate Affairs Commission (CAC) confirming that Prodest Hotel belonged to one Mr. Gogorobari Promise Needam and not the wanted Alode Youth Leader/former Eleme LGA PDP Youth Leader, Princewill Osaroejiji as he misinformed the State Governor thus, contributing to reasons for the hotel’s demolition on May 10, 2020 under Executive Order Number Six that prohibits hotels among others from operating as part of measures to curb the spread of corona virus disease (COVID-19) in the State.

We appreciate the response of the Honourable Chairman to our research findings in the statement personally signed by our Executive Director, Fyneface Dumnamene Fyneface; a renowned international Environmental Justice Activist and Human Rights Defender. However, we least expected that the Chairman would resort to name-calling, insults and a repeat of the same mistakes for which we called for his sanctioning for misinforming and misleading His Excellency, Chief (Barr.) Nyesom Wike vis-à-vis the State Executive and Security Councils on the true ownership of Prodest Hotel, Alode at a time that the truth was most required from him for a State decision-making.

While we do not want to join issues with the Honourbale Chairman by replying him squarely, it is important to note that he had again attempted to mislead the public about the competence, credentials and level of training of our Executive Director because he had also failed to carry out even “elementary” research about the person he wanted to call names to be sure that he was speaking the truth to avoid the same mistakes made about Prodest Hotel which we have now corrected. We therefore appeal to Hon. Philip Okparaji to focus on facts of issues and not personality attacks to berate the personality of our Executive Director because Fyneface Dumnamene understands the rudiments and elementary facts of law as a Political Scientist that studied up to International Law as part of his Degrees; had good professional human rights trainings in many countries of the world and may also be more educated.

May we thus remind the Honourable Chairman who himself is a Lawyer that an Executive Order is not a Law but an administrative instrument. Even if it were to be a Law, the 1999 Constitution of the Federal Republic of Nigeria (As Amended) which in Chapter Four guaranteed the fundamental human rights of citizens is the Grundnorm and prevails over any Law that is inconsistent with it. Thus, an Executive Order should not erode rule of law in any society no matter the aims we want to achieve with it.

The conviction of the Manager of Prodest Hotel, Bariledum Azoroh, Ph.D on May 18, 2020 who is also alleging the violations of his rights to fair-hearing, denial of access to his lawyer, charge sheet, etc. in the trial process is a confirmation of our research finding on the hotel ownership and we hereby reiterate our call for the Rivers State Government to stop further action on the property like plans to build primary schools because a court of competent jurisdiction has not yet pronounced the properties forfeited to Government.

We however wish to place on record that the outburst of Barr. Philip Okparaji over a simple research report as part of our contributions to development that empirically determined the true owner of Prodest Hotel as against his alleged misinformation to the State government reminds us of the private number phone call to Fyneface Dumnamene in the night of May 12, 2020 (as also reported to the hearing of the State Commissioner for Information then), warning him not to investigate and publish any report that would run contrary to the State government’s position on the demolished Hotels.

ADVOCACY CENTRE would continue working with other local, national and international civil society organizations, development partners as well as its network of One Million Youth Volunteers of Human Rights Defenders and Promoters in the Niger Delta including Rivers State to monitor, report and advocate against human rights violations and abuses during and after the COVID-19 Pandemic.