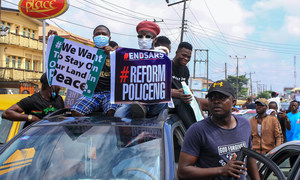 According to witnesses, Nigerian security forces opened fire on Tuesday night in Africa’s largest city, as protests continued over a now-disbanded and discredited police unit, known as the Special Anti-Robbery Squad, or SARS.

The Government has pledged to carry out further police reforms, and improve police accountability.

A curfew has been imposed on Lagos and other parts of Nigeria, with reports that tensions continued into Wednesday, with police across the city firing shots in the air, in an effort to disperse protesters who were defying the order to stay off the streets.

The UN chief expressed his condolences to the families of the bereaved, and wished a speedy recovery to those injured.

He called on Nigerian authorities “to investigate these incidents and hold the perpetrators accountable.”

Mr. Guterres also urged security forces “to act at all times with maximum restraint while calling on protestors to demonstrate peacefully and to refrain from violence.”