The Emir of Bauchi, Rilwanu Adamu, has approved the sacking of a senior traditional title holder and member of the Emirate Council, Bello Kirfi, for disrespecting the Governor, Bala Mohammed.

Mr. Kirfi was also stripped of his position as the Wazirin Bauchi, a title reserved for the Emir’s top administrative adviser and a kingmaker.

This was the third time a traditional ruler was sacked or suspended for an alleged rift with the governor.

A letter addressed to Mr. Kirfi, a known ally of the presidential candidate of the Peoples Democratic Party (PDP), Atiku Abubakar, by the Emirate Council’s spokesperson, Shehu Mudi, stated that he was sacked for being disloyal and disrespecting the governor.

“I am directed to refer to a letter from the Ministry of Local Government Affairs with reference No: MLG/LG/S/72/T dated 30th December 2022.

“The content of the said letter indicated your disloyalty and disrespect to the Executive Governor of the State and the government. It, therefore, directed for your removal with immediate effect.

“Given the above, you are hereby removed from office as Wazirin Bauchi and also as a Council Member of Bauchi Emirate,” Mr Mudi said.

The relationship between Mr Kirfi and the governor deteriorated soon after Mr Mohammed was sworn in. But the rift between both men became undeniable last year following the commencement of the campaign for this year’s election.

Mr Mohammed recently wrote to the PDP Chairman, Iyiorchia Ayu, alleging that he was being sabotaged by “godfathers” close to the party’s presidential candidate, Mr Atiku.

Though Mr Mohammed didn’t mention the names of those godfathers, it was believed he was referring to Mr Kirfi, a former House of Representatives speaker, Yakubu Dogara and Abdul Ningi, who are all known to be close allies of Mr Atiku.

Not the first time

PREMIUM TIMES reports that this was not the first time a traditional title holder lost his position after falling out with Mr Mohammed.

In 2021, the flamboyant Yakubu Shehu was suspended as the Wakilin Birnin Bauchi “for disrespecting the emir by dressing in regal robes befitting an emir” during a royal durbar at the Bauchi State Government House.

The lawmaker was also said to disregard and refuse to greet the Emir when he entered the place with his entourage.

Mr Shehu, the House of Representatives member representing the Bauchi metropolis, was a member of the Peoples Redemption Party, PRP.

Despite the reasons given for the sack, Mr Shehu said he was suspended for not joining the governor’s PDP when he decided to leave the PRP, under which he was elected as a federal lawmaker. Instead, he rejoined his former party, the APC.

In 2022, a former House of Representatives speaker, Yakubu Dogara, was suspended as Jakadan Bauchi by the emirate over a crisis in Tafawa Balewa and Bogoro areas.

The council accused Mr Dogara of involvement in the crisis, but he accused the state government of orchestrating the suspension.

Mr Dogara allegedly got in trouble with the governor for rejoining the APC from the PDP. They are from the same political zone, Bauchi South. 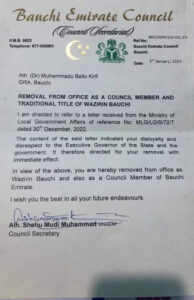