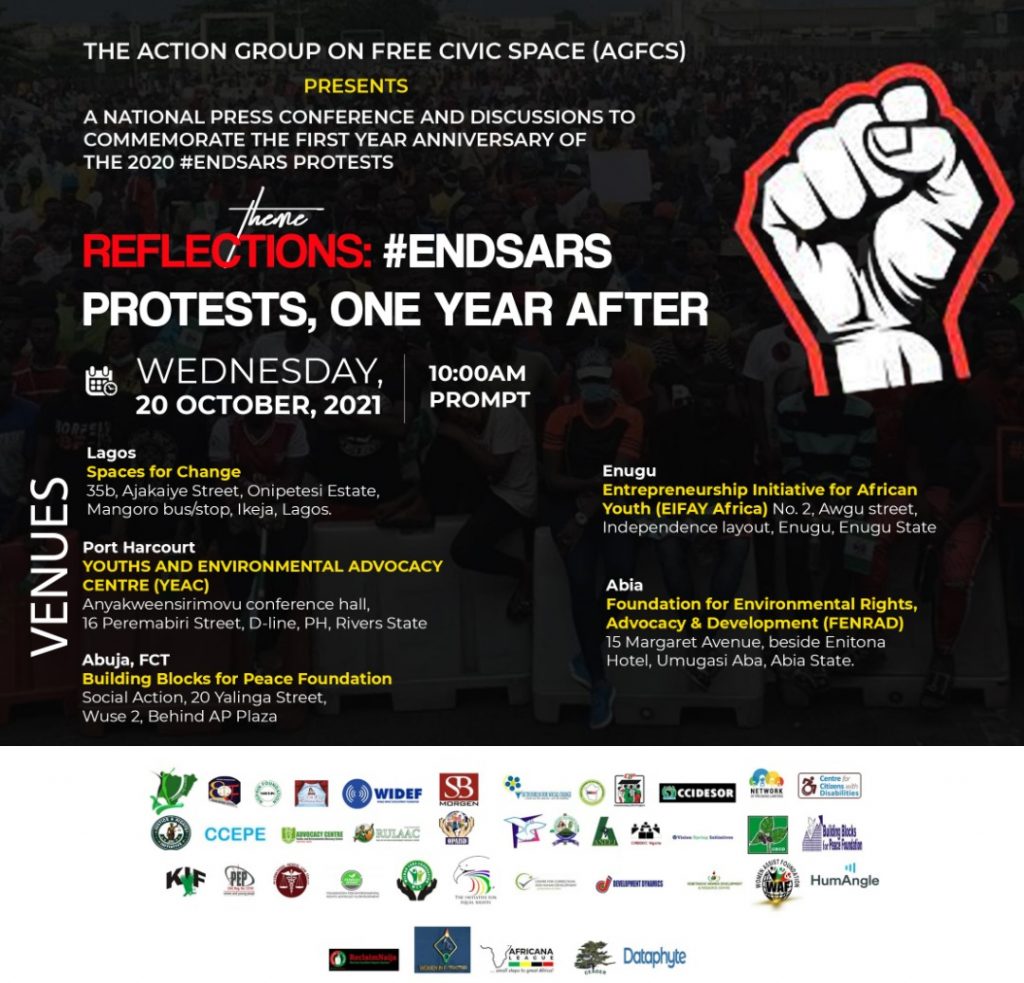 At a string of symposia held on October 20, 2021, across five states in Nigeria namely; Lagos, Rivers, Abia, Enugu states, and the FCT Abuja, members of the Action Group on Free Civic Space (AGFCS) gathered to commemorate the first anniversary of the #ENDSARS2020 protests against police brutality in Nigeria.

At the meetings hosted by five-member organizations of the group – Youths & Environmental Advocacy Centre, Foundation for Environmental Rights Advocacy & Development, Spaces for Change, Building Blocks for Peace Foundation, and Enugu State Network of Civil Society Organisations – journalists, civil society practitioners, representatives from relevant government parastatals such as the National Human Rights Commission and, members of the public turned out in solidarity to review the events of the past year, deliberate on action points for reforming the civic space in Nigeria and finally, take the opportunity of the reflective gatherings to discuss preliminary findings from The Security Playbook, a-soon-to-be-released-research report, conducted by the AGFCS.

In Abia State, the two-phase event reviewed the state of insecurity in South East, Nigeria alongside the motivations that fuel the separatist agitations in the region which has seen the increased shrinking of the civic space as both state and federal authorities battle to preserve their legitimacy with the use of brutal force to quell voices of dissent. Discussants at the event agreed that rather than adopt the use of force to deal with dissatisfied ethnic voices, the Nigerian government should adopt a strategic approach that accommodates and respects the grievances of all citizens.  For instance, on the issue of separatist agitations in the southeast, the government must revisit Nigeria’s history, especially the events that birthed the country’s civil war which lasted from 1967 -70. In doing this, state actors should explore channels for achieving restorative justice, especially in the southeast where the memory of the war still hurts generations whose ancestors suffered genocidal attacks perpetrated by Nigerian security forces during the war.

In a similar vein, participants at the symposium in FCT, Abuja decried the government’s continued militarisation of protests and assaults against civic actors. Discussants at the event also spoke against the Nigerian government’s adoption of extreme securitized responses to address national issues bordering on ethnopolitical disagreements and democratic dissent.

In Enugu State, the Nigeria Police Force barred organizers of the AGFCS symposium from gaining access to the location of the event. Nevertheless, the AGFCS coordinator of the programme in the state, Comrade Emmanuel Acha, held an online press briefing where he shared with both local and national media practitioners, details surrounding the botched programme and, the AGFCS’ commemorative review of the #ENDSARS2020 protests against police brutality

Attendees at the symposium in Rivers State condemned the continued detention of many residents from Oyigbo community since the demise of the #ENDSARS 2020 protests. They suggested the AGFCS approach the courts to seek justice for victims illegally detained for exercising their fundamental rights. On reforming the security sector in the country, participants reflected that in order for the Nigeria Police Force to adopt community policing as a major reform, there is a need to evaluate the quality of security operatives to weed out irresponsible personnel.

In Lagos, a panel of six discussants and other participants at the event deliberated on the increasing misuse of digital laws and technologies by the Nigerian government to unlawfully intercept communications of targeted civic actors and generally silence dissent on cyberspaces in Nigeria.

At the end of the sessions, participants and lead discussants proffered entry points and ideas for addressing systematic problems in law enforcement, social justice, rule of law, accountable and fair governance in Nigeria. The Action Group on Free Civic Space represents a loose network of organizations, student unions, social movements, and active citizens working on different thematic issues but committed to ensuring that government regulation in the name of national security does not shrink the civic space in Nigeria.